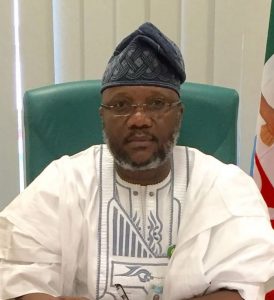 Senator Ibikunle Amosun, Outgoing Governor of Ogun State,  has picked Abdulkabir Adekunle Akinlade as his preferred candidate to fly the All Progressives Congress (APC) ticket for 2019 governorship election in the state.

Abdulkabir Adekunle Akinlade is an APC member representing Egbado South and Ipokia Federal Constituency at the House of Representatives.

He is from Ogun West Senatorial District, popularly known as Yewa/Awori District.

Akinlade had previously served under Amosun as the Senior Special Assistant on Taxation and Revenue between 2011 and 2014 before he was elected into the lower chamber of the National Assembly in 2015.

Amosun had earlier promised Ogun indigenes a ‘whiz kid’ and Muslim candidate as his successor.

The governor had also promised to unveil his candidate today if all the aspirants fail to agree on a consensus candidate.

Among those jostling for the ticket from Ogun West are, Amosun’s Chief of Staff, Tolu Odebiyi, Speaker of Ogun Assembly, Suraj Adekunbi and some commissioners in the State Executive Council.

Other Senatorial Districts have aspirants battling for APC ticket, but the governor had openly declared his support for an indigene of Yewa/Awori District.

Akinlade was picked as consensus candidate by Ogun West Elders after a long meeting held overnight to decide on long list of governorship aspirants from the zone.

Amosun is expected to present Akinlade to the party later in the day.